Stingrays belong to the cartilaginous fishes [Class Chondrichthyes], which includes sharks, stingrays, electric stingrays, skates, and sawfish. Cartilage is soft, unlike true bone, and is very difficult to preserve. Fossilized remains of cartilaginous fishes consist mainly of their teeth, spines, dermal scales, and, in some cases, vertebrae.

Stingrays evolved from sharks, when the shark's dorsal fin developed into a whip-like tail. Sharks have a long geologic history, extending back to the Devonian (about 400 million years ), whereas stingrays extend back only to the Early Cretaceous (about 140 million years or so).

Bat rays, named for their wing-shaped pectoral fins, are a variety of stingrays. Bat rays are euryhaline, which means that they can tolerate a wide rang of salinities, hence they are found in estuaries, bays, and rocky-bottom shorelines (including kelp beds).

Bat rays feed on mollusks, crustaceans, and small fish. They use their wing-shaped fins to move sand and mud, thereby exposing their prey. Bat rays are common along the eastern Pacific coast between Oregon and the Gulf of California.

The maximum size of a bat ray is about 200 pounds, with a wingspan of about 6 feet (see my artwork below). 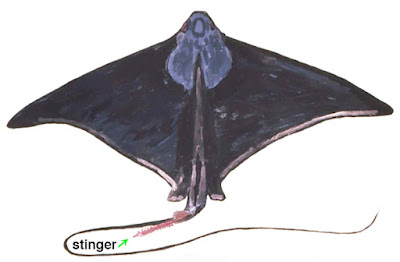 All stingrays have a venomous stinger (spine) near the base of their tail. The two views (lateral and side) shown above are of a complete stinger, 8.3 cm long and 4 mm wide, are from a modern-day, full-sized adult specimen of the bat ray Myliobatis californicus from Ventura, southern California.

As shown below, stingray teeth are flat and form tightly-packed rows. Unlike sharks, which have sharp and piercing teeth for eating fish, stingray teeth are used only for crushing and grinding shells (clams, crabs, etc.). The crushed shell is inedible and is ejected, whereas the soft parts of these shelled animals are then swallowed. 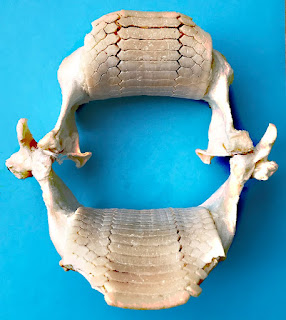 Stingray teeth fall out and are replaced continuously in living specimens. Fossil stingray teeth are, therefore, moderately common locally. They occur mainly as fragments of partial sets of teeth. 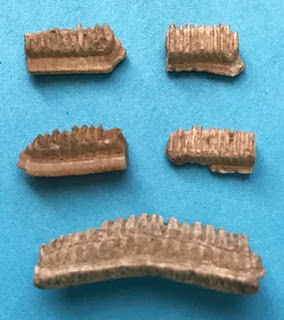 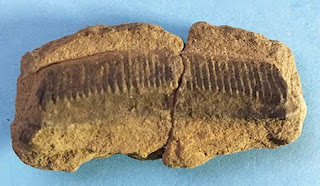 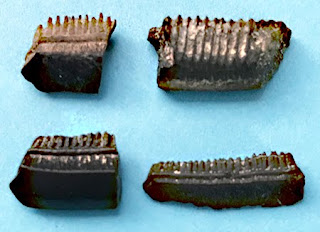