In the early 1980's, geologists and paleontologists were excited by the discovery of what appeared to be arthropod appendages (legs) preserved in a slab of upper Precambrian or lower Cambrian silty sandstone found in the Grand Canyon, Arizona. Pictures of the slab were published on the cover of at least one leading journal (I searched the internet but could not find the article).

The slab was put on display at some major universities in the American west. I viewed the slab at Caltech. 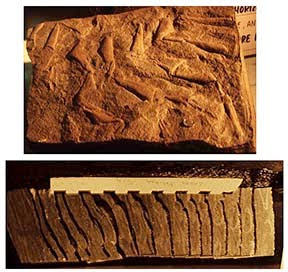 The significance of this slab is that, if it actually contains fossil arthropod appendages, then they were larger and more evolved than previously believed. Although the bedding-plane view seemed to support the idea that the structures were "legs" of some sort, the cross-section view did not support this idea. Cooler heads prevailed eventually, and most experts ruled that these structures are actually "mud curls" or "sun curls," caused by the shrinkage of muddy layers on an ancient shoreline or lake. In summary, the slab contains pseudofossils, not fossils.

Once the geologic community, as a whole, considered the evidence, this slab became relegated to the dark depths of some storage room and was not mentioned again!

It is interesting to mention that *McKee (1932), a Grand Canyon Park naturalist, illustrated slabs similar to the one shown above. He referred to them as "fucoides," a name used by paleontologists then to describe any unusual "biologic?" structure, like algal remains, "worm" burrows, etc.