Garnet is not a single neosilicate mineral; rather it is comprised of several groups of closely related silicate minerals. The generalized chemical formula for the entire garnet group is Ca3Al2Si3O12, but there can be much substitution of other elements (e.g., iron, magnesium, manganese, chromium] for the calcium [Ca] and the aluminum [Al]. As a result, there is a huge range of colors in each of the groups, and identification as to the specific group of garnet can be difficult. Some crystals of garnet are gemstones because of their beautiful color and/or rarity. Garnets can form in both metamorphic and, to a lesser extent, in igneous rocks.

The pure form of grossular garnet is colorless, but if iron substitution takes place, the color can be white to brownish red to green or black (no color). A South African variety of grossular garnet with considerable iron substitution is called “South African Jade” or “Transvaal Jade.” It is, however, not jadeite or nephrite (see my recent post concerning these two minerals).

The first three images show different crystals of a cinnamon-brown grossular garnet. Their provenance is probably Mexico. They are all 3 cm in height. The first image shows the rhombic dodecahedron crystal habit found in all garnets. The next two are interior views: one showing a cross-section of a large black core (iron rich), surrounded by an outer thick lighter color zone (much less iron). The next view shows fine internal layering of a partial specimen. The dark color of the core and the layering within the outer (lighter) core might be the result of compositional zonation related to temperature change during the complicated formation of the crystal. 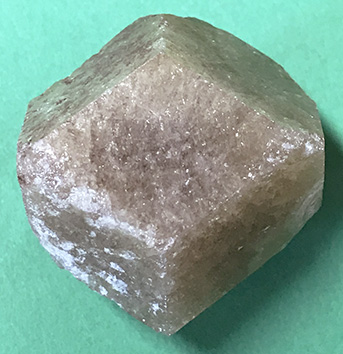 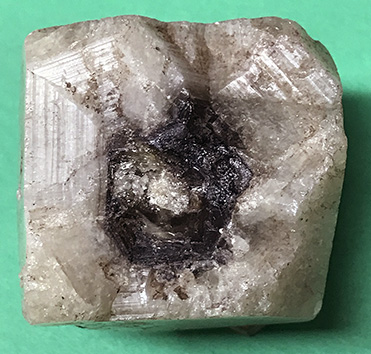 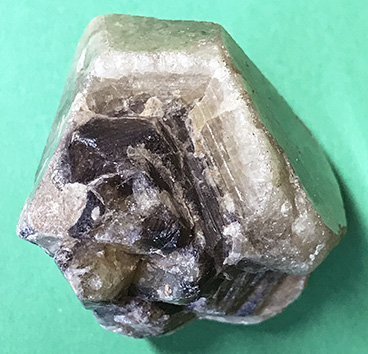 The last image, shown below, is a hand specimen (8 cm maximum dimension) of quartz-rich rock containing abundant garnets. The provenance is unknown to the writer. There are two kinds of garnet in this rock. One is possibly a brownish-red grossular garnet. Its crystals are abundant, large in size (up to 1 cm), and brownish red, with a few having black cores. The other kind is green grossular? garnet. Its crystals are mostly small-sized and can contain some tiny “dots” of black inclusions. A few of the green grossular? crystals are large (up to 1 cm). 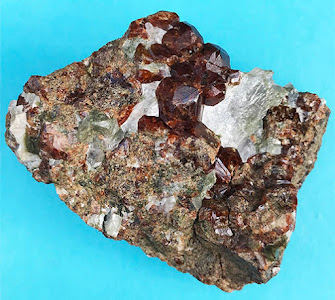 PALEO & GEO TOPICS: Comments by R. L. Squires
I received my B.S. and M.S. degrees in geology at the University of New Mexico, I received my Ph,D. degree in Geology at California Institute of Technology. I taught geology for 40 years at California State University, Northridge. I published more than 150 peer-reviewed papers on paleontology and geology. After I retired from teaching, I continued to publish. It was at this time I started my blog as a way to share my expertise. As of 2022, I have created 250 posts.