Amethyst is a very popular semiprecious gemstone because of its vivid purple color. It is also affordable as it is made of quartz, the most plentiful mineral in the Earth’s crust. Although amethyst can be found on every continent, its occurrence depends on certain conditions. The word “amethyst,” like many science words, is derived from Greek. The word means “not drunken,” and ancient Greeks, wore amethyst and carved drinking vessels from it, in the belief that this stone would prevent intoxication.

Most specimens of amethyst are formed in geodes, which are hollow spaces (cavities, vugs, cracks) in the surrounding rock, called “country rock.” The hollow spaces allow for amethyst crystals to grow mostly uninhibited, thereby forming nearly complete crystals, with crystal faces in abundance. 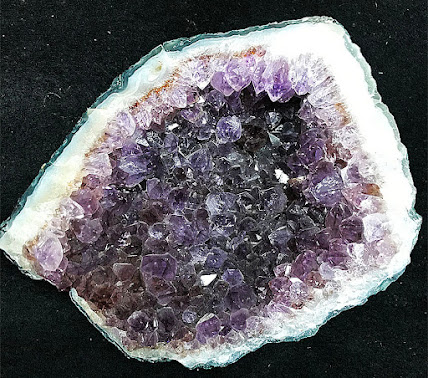 The image above shows one-half of a geode vug (14.5 mm maximum diameter) filled with closely packed amethyst purple-colored crystals. Notice that there are several distinct areas of quartz material in this geode: an innermost area of purple crystals; surrounded by a layer of clearer (light purple to totally clear crystals); then a band of chalcedony (milky white cryptocrystalline quartz—see one of my earlier posts about this particular form of quartz); and a greenish thin layer making up the outside of the geode. 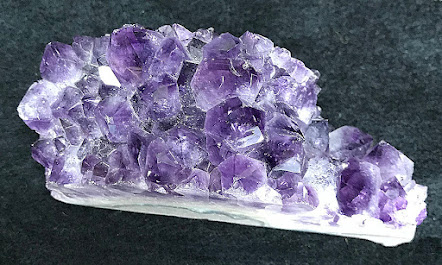 This cluster of amethyst crystals shown above is 13.5 mm length and 6 mm height, and it is a fragment of a geode.

Amethyst gets its beautiful purple hue due to two factors: 1) the presence of iron impurities in the quartz-crystal structure [the actual amount of iron (Fe+3) is low: in the range of 10’s to 100’s parts per million], and 2) natural gamma-ray radiation (nuclear decay) emanating from the surrounding rocks. It these two factors are not present, then the purple color cannot form. 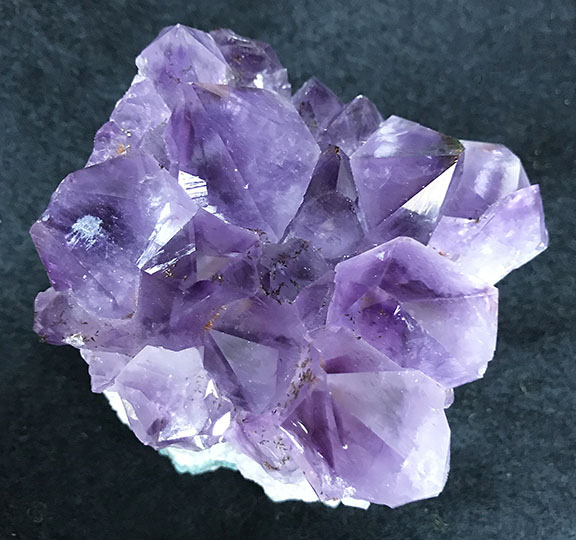 This specimen, 8 mm by 8 mm, is a cluster of somewhat large amethyst crystals in a fragment of a geode. 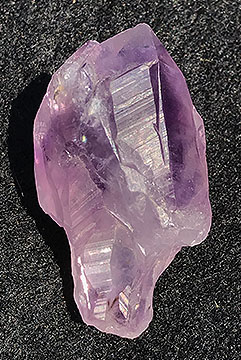 This last specimen is a single crystal (5 mm tall by 2.5 mm wide) of amethyst showing variation in hue from red/violet to purple. Variation in the hue of amethyst is a common feature, with many crystals showing range from light pink to violet to purple to dark purple, depending on the amount of iron and the intensity of radiation. The interior of the crystal shown here is darker (more iron) in its interior versus its more exterior regions.

This single crystal also has closely spaced striations (small parallel lines) on some of its crystal surfaces. This is another common feature of amethyst. Striations (as in all minerals) are caused usually by alternating crystallization processes between different crystal faces as the crystal grows.

You might find it interesting to know that the purple color in “old-glass” bottles, made between 1860 and 1915, is the result sunlight (UV light) affecting with small amounts of manganese [not iron] in the glass. Traces of manganese were used as a clarifying ingredient. Prior to 1860, lead was used, and since 1915, selenium has been used to make glass.

Websites consulted in the preparation of this post are the following:

PALEO & GEO TOPICS: Comments by R. L. Squires
I received my B.S. and M.S. degrees in geology at the University of New Mexico, I received my Ph,D. degree in Geology at California Institute of Technology. I taught geology for 40 years at California State University, Northridge. I published more than 150 peer-reviewed papers on paleontology and geology. After I retired from teaching, I continued to publish. It was at this time I started my blog as a way to share my expertise. As of 2022, I have created 250 posts.